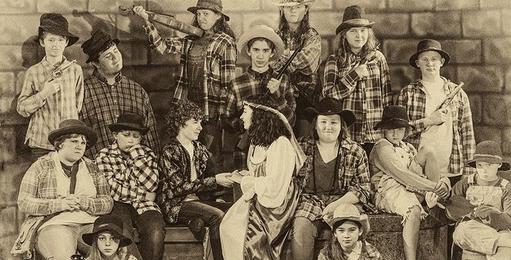 MCYT Bard Bums is a youth acting company, comprised of actors who are in grades, 3-12.

Motor City Youth Theatre (est. 1990) began its Shakespeare for Families program in 2005, with its premier production of A Midsummer Night's Dream, featuring a mixed cast of adults and children.

MCYT's Shakespeare for Families has performed Hamlet, The Farndale Avenue Housing Estate Townswomen's Guild Dramatic Society's Production of Macbeth, and The Complete Works of William Shakespeare, Abridged, with adults as well as youth productions of Hamlet, Macbeth, The Tempest,  and two productions of A Midsummer Night's Dream.

In 2015/16 the name, MCYT Bard Bums, was given to a well-deserving youth cast that offered eight performances of the full version of A Midsummer Night's Dream, including a performance at the Wayne State University Hilberry Studio Theatre.

MCYT Bard Bums study and rehearse full Shakespeare's plays for 100 hrs prior to their productions. Come and be amazed by these wonderful kids who love Shakespeare and want to share the Bard's exciting work with you!

MCYT BARD BUMS ARE BACK!

A full length production of scenes from

Romeo and Juliet Meet the Hatfields and the McCoys

as well as doing a condensed version of their production for the 2019 Detroit Fringe Festival.

performing in Detroit this summer, following their run at Motor City Youth Theatre in June as we await news on the status of the Globe Theatre project.

Masks must be worn in the theatre
​All actors are fully vaccinated
Please address all questions to Nancy Florkowski at motorcityoutheatre@gmail.com