Motor City Youth Theatre was sponsored by South Redford Schools from 1990-1999
where they continuously offered productions and workshops, including a six-week performing arts series for community children as well as touring to schools in Livonia, Redford, and Detroit.

In 1999 the company moved to Masonic Temple in Detroit where they were sponsored by the Scottish Rite Masons for five years as a part of their family outreach program. During that time they were fortunate to be able to rehearse and perform in the 1,500 seat Scottish Rite Cathedral.

MCYT moved in to its present location in Livonia in 2005. MCYT members have performed at the Livonia Civic Center Library Auditorium, the Livonia Redford Theatre Guild, Livonia’s Concert in the Park Series, and at Campus Martius in Detroit.  In 2003, during its musical production of The Wizard of Oz, TinderBox Productions was featured on Channel 7's "From the Heart" in which Erik Smith named the group "Detroit's best kept stage secret.”  Since that time, Motor City Youth Theatre has grown considerably and is well known to children and families in over fifteen different Detroit area communities.

Motor City Youth Theatre is a 501 (c) (3) charitable organization and contributions are tax deductible as provided under IRS regulations.

Co-founder, Fred Florkowski, MCT resident Scenic Designer and Technical Director, is an Associate Professor and head of Scenic Design for Wayne State University's Theatre and Dance Department. He has provided scenic designs and technical direction for over 80 productions in regional theatres including Second City, Detroit. Fred is currently designing the Bonstelle production of Peter Pan. Other credits include Twas' the Night before Christmas, Ragtime, The Comedy of Errors, and The Caucasian Chalk Circle (Bonstelle) Misalliance, Hamlet, and The Lady's Not for Burning (Hilberry); East Texas Hot Links, Plowshares, and Tales of Wishing and Other Silliness, The Storytellers, and Fools  (Oakland Community College). Fred co-founded MCYT (AKA Redford Youth Theatre/Tinderbox Productions) with Nancy in 1990.  Fred also spent A Month in Moscow at the Moscow Art Theatre School.

Motor City Youth Theatre staff is made up of talented actors or specialists who have theatre and/or teaching degrees in the state of Michigan and love working with children!

As in all MCYT workshops and productions, MCYT summer programs emphasize team work, respect for differences and a love for theatre.  Students will work on character development, voice, movement, and improvisation skills in a supportive and non-competitive environment, while creating long-lasting friendship.
You can contact us on our Contact page link.

Check us out at Who Fish!! 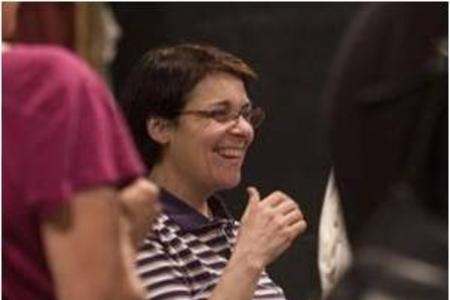 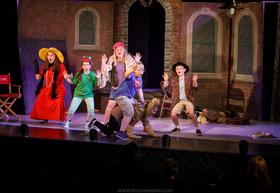 Primarily under the leadership of the tenacious Nancy Florkowski, Motor City Youth and now Adult theatrical productions have served the entire Detroit Metropolitan area for over 25 years.. Students flock from the far reaching suburbs to study in one of the Motor City classes in acting, singing, dancing, improvisation, set design, and play writing. One is enriched in terms of accomplishment as well as increased self esteem when they find that they are capable of standing on a stage, performing in a play. For the young participants, especially, this kind of experience can be life-changing. Attention must be paid to organizations that touch so many young lives- such as The Motor City Youth Theatre. After finally establishing a theatre home of their own, these hearty and talented folks receive many congratulations.      Laura Gumina, 2014

​Kids!!  MCYT is a special place where everyone can be themselves and it's a wonderful feeling!  A big thank you goes out to Erin and Alyssa for stepping up in Noah's absence! Noah TRULY appreciated your helping him out and the whole team for MCYT!   He wanted me to personally let you all know that he missed being a part of the cast and being with his special MCYT friends!  Thank you to the friends who contacted me last night checking in on Noah and giving me an update!  Noah and I really appreciated it!  Way to break a leg!! See you all soon!
Kathy and Noah Wisniewski (Captain Hook, 2014)

​​You can request to be facebook friends with" Friends of Motor City Youth Theater and Grantland Street Players" and/or check out their website at www.mcyt.com where you can request to be put on an email list to get audition notices and event information. It's a great theatre, with a positive and encouraging atmosphere for all kids. My girls have been involved for 5 years now. Nancy Florkowski, is the theatre director and a retired teacher. She's awesome!    Rebecca Borsodi, 2014

​Dear Nancy and Fred,
My Brother and I would like to take some time during this Holiday Season to reflect on how much you and the MCYT have meant to our Mother (Carol Chapman)  and family.  Alison, Will and Nick enjoyed being a part of your Troupe and have many fond memories. Mother loved helping out and always made sure that the children had a chance to participate.  The last conversation I had with Mother was about the MCYT and she was very proud of the work you are doing...  Thom Chapman, 2014

To Bill Joyner, Musings:  My daughter Brianna has been involved with the (MCYT) theatre for over 2 years and it has been the BEST investment and best hidden treasure we have found in Livonia.  I have 4 daughters and 3 of the four are involved with MCYT with the youngest itching to get involved.  The way you described the theatre and performance was awesome....exactly how I feel every time I watch all of the kids perform. Christie Facione, 2010

MCYT was a great experience for me.  It prepared me for play auditions and a speech festival.  I had sooo much fun! Nadia Johnson (9 years old, "Acting for the Serious Student).

Evelyn Goll, (Grade 2, Mustardseed in A Midsummer Night's Dream, summer, 2015) says, "I like attending MCYT because it feels like another home with a bunch of my friends."  Her family likes it because MCYT teaches our daughter many new things in a fun, exciting way. They also allow her to try new things in a non-threatening way with peers of all ages.  "The plays are serious with a bit of humor at the same time." Brendan Goll

MCYT operates in the true sense of a community theater. My daughter has been able to explore her voice, and her abilities under a very qualified and knowledgeable set of volunteers and teachers. I love that MCYT fosters a sense of personal responsibility, and autonomy, while allowing the children performers to play and explore. It's one of our favorite places!  ~Jessica Savageau

MCYT builds confidence in myself and teaches me everything about theater. I am learning to be a better actress and how to choreograph scenes. But, the best part of MCYT is all the friends I've made. It's not easy moving when you're 12, but MCYT has made it better.  Taylor Duncan

MCYT is a family that works together to create a loving, nurturing, and educational environment.  We just happen to put on a show in the process.  MCYT is home.   Rachel Thomas

Because Motor City Youth Theatre is a 501 (C) (3) organization, we appreciate and depend on donations of any size. MCYT was blessed with the generosity on many people over the years.  We thank each and every one of you for your past support and generous donations of all sizes.

Motor City Youth Theatre will be forever grateful to Carol Chapman and the Carol Chapman Family Trust for their very generous donation to MCYT.  Because of their generosity MCYT was able to install a new LED lighting system and ceiling insulation for the theatre, with funds remaining for building upkeep and family discounts.

Carol Chapman was a theatre lover, world traveler, and my special education mentor and friend where we worked together in South Redford Schools.   Carol dedicated her life to teaching and helping all children. We also wish to thank Carol's son, Randy for his additional donation that helped MCYT get through the pandemic, while being shut down.

​Motor City Youth Theatre is also very grateful to the Hardies Family Trust in Livonia for their recent donation that will provide MCYT with a much-needed new commercial stair lift as well as plastic strip curtains to help insulate the lobby.

Thanks very much to Meghann Bjarnesen for her monthly donations to MCYT through Benevity.  Meghann, a former Pierce Middle School drama student of Nancy's helped provide funding for MCYT participation fees discounts and building maintenance.

Ethical Exteriors from South Lyons came through for us when we were forced to get a new roof or lose our insurance. Todd Wilson provided free labor for the entire roofing project.

The Hardies Family Trust of Livonia has generously donated funds to allow for the installation of a new chair lift for our theatre. We are grateful for their help in making MCYT handicapped accessible.